We are seeking submissions for About a Bicycles’ third issue, I’m, like, in Love with You!, to be launched Autumn 2013. Our project on The Affective State has intended to historicize and contextualize our understandings of affect theory. From the get go, AAB loosely delved into the topic of affect on an experiential level, looking at embodied affective labour, the general ennui of everyday life, the selling of our selves for capital gain via work, and the effect of neoliberal precarity on our affective lives. In our last issue, we asked for anecdotal statements that spoke to these constructs and self-conceptions. With this project, we see the flows between selected texts, the way one conception of affect connects to the other (i.e., becoming-animal as a constant return) and the way others write in their own time (i.e, gendered restraint in Freud). END_OF_DOCUMENT_TOKEN_TO_BE_REPLACED

We’re down to our last two sessions! Please join us this Thursday, September 26th for session 7 of About a Bicycle’s project on the Affective State. Another slight shift from Freud, we’ll be discussing Eve Kosofsky Sedgwick and Adam Frank’s Shame in the Cybernetic Fold: Reading Silvan Tomkins alongside a few short chapters from Nina Power’s One Dimensional Woman (You’re like an Advert to Yourself & Socialism Must Not Exclude Human Sensual Pleasure From Its Program!). The former address Tomkins’ serialized conception of the nine, biologically-based, affects, with greater attention to intensely felt shame and anger. While we’ve discussed the multiple entry points for affect theory in poetics, the humanities, the arts, socioeconomics, and the political arena with some kind of temporal succession, Sedgwick and Frank are interested in how it currently applies to the “thinking routines of theory.” They develop a way to place his work in the context of postwar information science and technologies. Nina Power, on the other hand, is not explicitly aligning her work with affect theory, but we hope to orientate her Feminist and Marxist analysis with how affect is discursively constructed and how shame and anger manifest in women’s work and consumer capitalism.

Readings can be found on the schedule.

On Civilization and Its Discontents OR Freud singing, if I only had an oceanic feeling

While sipping Suffering Bastards, we discussed the shift from Ngai to Freud, and how to orientate ourselves with the latter text while considering the various analyses of affect we’ve read thus far. He describes divisive and paradoxical conditions of civilization, how the sub/components are what we (who’s we?) use to project ourselves from suffering and yet it is what retains us from happiness and/or is the source for misery. “We would be happier to abandon it”, he writes, but if we choose to do so, and construct a new social reality for ourselves this entails madness, mania, and the conditions for the paranoiac. There is no place for an intwined practice of self-conception and social-urban-global imagination.

In connection to Ngai: “It is asserted, however, that in some way each of us behaves rather like a paranoiac, employing wishful thinking to correct some unendurable aspect of the world and introducing this delusion in reality. Of special importance is the case in which substantial numbers of people, acting in concert, try to assure themselves of happiness and protection against suffering through a delusional reshaping of the reality. The religions of mankind too must be described as examples of mass delusion. Of course, no one who still shares a delusion will ever recognize it as such.”

The tricky thing is that it can be read both as the delusional consumer and the delusional free-radical. Here thinking of Richard Gilman-Opalsky’s Spectacular Capitalism where contemporary capitalism denies its internal logic and macroeconomic reality – anyone who opposes it is certifiable. Or Katherine Rowland’s interview of Gary Greenberg where he critiques the DSM as a framework for understanding mental suffering: “the social conditions under which we live are increasingly atrocious. It could be that the reason we’re all getting whatever it is we’re getting is because the world truly is in some way progressing toward catastrophe”.

The oceanic feeling as a sense of  limitlessness, wholeness, and a blurring of the Ego and Id relationship again acts as a way to deny reality but is also the root of “religious energy” prior to being captured by the Christian apparatus. Freud does not sympathize with this feeling as he does not feel it himself. We question his antiseptic disavowal and turned to other conceptions of the oceanic feeling from Buddhist tradition.

AAB // the Affective State // 20 Sept // Civilisation and its Discontents

Please join us again for another session of the Affective State on Friday, September 20th. This week’s session will be on Freud’s Civilisation and its Discontents. Moving from Ngai onto Freud’s late work, the transition is both easy and jarring.  The paranoiac aspects of Spahr’s work, as noted by Ngai, reaches a point at which “it becomes impossible to separate the interpretations the subject generates from those that generate the subject” (Ngai).  Freud attends to a sort of paranoiac mysticism, an oceanic feeling, a blurring between the ego and the world. In both cases, uncertain demarcation.  In the text, Freud examines how the pleasure principle, along with legal prohibitions against destructive behaviour, breeds discontent.  The political and economic injunction to enjoy (consumption, brand identity, social networking), is thus presented to the public as a safe alternative source of pleasure seeking.

The text is available on the schedule. The PDF is 40 pgs and the physical book is approx. 100pgs.  Please read as much as you can for the meeting.

Many of us found Spahr’s use of the pronouns (“he or she”) draws attention to gendered struggle and labour relations.  One of us felt that it effaces those struggles and difference. Spahr’s text is both tedious and inharmonious, producing a sort of comic effect. Spahr’s usage of the paranoiac split of identity in “thrashing seems crazy” can be applied to LIVE‘s uncertain identification as a sort of paranoia. “Spahr’s generic-paranoid phrasing appears to neutralise the assignation of gender values to language even as the claim to gender specificity in language is being made” (Ngai).

Ngai mentions the notion of belatedness as relating to paranoia. There is an assumed temporality of knowledge production, which, if slightly skewed produces an unsettling effect.  There is a sort of recycling of concepts between media (music, literature, painting), producing a sort of deja vu effect. 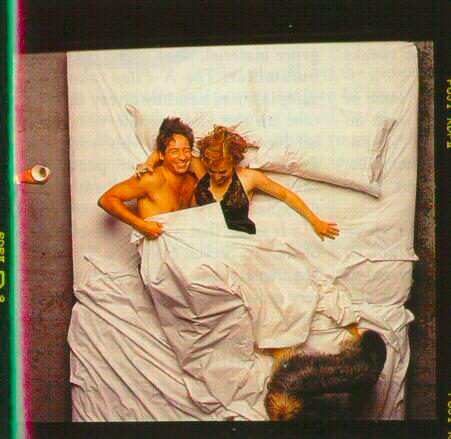 Please join us Thursday, September 12 for About a Bicycle’s fifth session on the Affective State. Continuing our conversations from before break, we’ll focus on one of the seven deadly affects, paranoia, from Sianne Ngai’s Ugly Feelings and also read Juliana Spahr’s poem “Thrashing Seems Crazy” from Responses. As a whole, Ugly Feelings very much intends to enable negative affects for political action – making something move outside of growing heads, minds, egos. Herein we discuss the gendering of paranoia in “conspiracy theory” thrillers, the political arena, avant-garde feminist poetry, and theory. For Ngai, paranoia signifies how the social subject thinks of himself outside or inside of the “system,” and finds himself safeguarded by this buffer. How can feminism recuperate this negative affect without reproducing androcentrism? AAB has explicitly stated how our “restriction on gender was originally decided upon to keep out the intellectual alpha male,” and we’re eager to discuss how this premise can be extended upon by Ngai’s undertakings.

Texts are available on the  schedule.

much love and solidarity,

Notes on the Introduction to Ugly Feelings and Bartleby

Throughout Ugly Feelings there is frequent recourse to Melville’s work, particularly the character of Bartleby. Where many critics read Bartleby through the self-reflective tone of the narrator, Ngai’s project aims to look beyond the ego’s eye and shed light on ambiguous affects, feelings, and emotions. The book is divided into 7 chapters on tone, envy, anxiety, paranoia, irritation, animatedness, and stuplimity, with an afterword on disgust. These negative affects are considered non-cathartic and constitute a sense of duration – a history of quotidian. She makes mention of heavier, momentary emotional states such as rage, fear, and jealousy, but is intent on exploring interstitial categories that make up everyday experiences in a continual way. Yes, these affects are the lubricant of contemporary capitalism by way of embodiment through labour, consuming – a continual transcription of becoming-weak in the world. These affects evoke a sense of displeasure where such feelings are negated and not to be confused with who the social subject really is. Why am I feeling this? Who is feeling this? This isn’t me. There is no solace found in such affects.

The book approaches emotions “as unusually knotted or condensed ‘interpretations of predicaments’ – that is, signs that not only render visible different registers of problem (formal, ideological, sociohistorical) but conjoin these problems in a distinctive manner” and she reads these predicaments by a “general state of obstructed agency with respect to other human actors or to the social as such” (3). And the book furthers this by its involvement with “multiple levels of negativity that make the ugly feelings in this study so useful for conjoining predicaments from multiple registers–showing how sociohistorical and ideological dilemmas, in particular, produce formal or representational ones” (12).

Ugly Feelings is a “bestiary of affects” — she replaces lions and vampires for rats. This text, in light of the others we’ve read, brings forth new comprehensions of the words intensity, animal, categories, emotion, feelings, affects. Ugly Feelings seems to be taking us in a different direction, away from sudden, intense affects and separation from emotions, feelings. By juxtaposing film to literature to theory and ultimately rejecting emotions, feeling and affects in any formalist category, the question of locality is left open.

Is this the modern day Bartleby?

Back issues of AAB are now available online

If you’re interested in a material copy, please feel free to contact us. Will also be available at our next launch. While they last…

You are currently viewing the archives for September, 2013 at AAB.